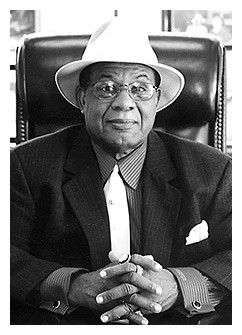 On, July 25th, 2020, Melvin (Mel) Harper, 91, of Des Moines, passed from here to eternity. Mel was affectionately known as "The Boss". He was born on January 18th, 1929, to Norman and Dora Harper, in Dallas, Texas.
Early as a youth, his ambition and natural talent for business became apparent, which later was an incentive for him to pursue higher education. He attended Sam Houston State University, in Texas, on a football scholarship and graduated with multiple business related degrees. He also served his country in the United States Army. He later married Margaret Alene Winston in 1959.
After moving to Des Moines, Iowa, during the 1950's, he emerged on the scene as a business owner on the infamous "Center Street", a once thriving and immensely successful hub for African American businesses. He owned and operated the 790 Vets Club and Empire Room, where Dizzy Gillespie, Irene Myles, and other local and national entertainers of the time performed. His other ventures included Robert's Lounge and Mel's Bar and Grill in West Des Moines. This was his way to extend an invitation to the public to join him at a place where you can meet a diverse crowd, hear good music and enjoy great food.
In addition to his entertainment establishments, Mel was involved in various parts of the construction industry. He owned Ready-Mix West, Inc and M. Harper Construction, Ltd, until his retirement in 2003.
Mel defined his own sense of retirement. He had an inspiration to help others in his community, and did so alongside his friend, Elder Eddie Davis. This led him to volunteer his time as the Development Director of Fundraising, with the non-profit organization, The Eddie Davis Community Center, in Valley Junction. He was a committed volunteer that accomplished and fulfilled all of his fundraising goals with the generous help of many of his business associates and friends. His efforts in conjunction with the efforts of The Long Family, and many others, enabled the delivery of human, social, and community services to the community. His most exemplary goal was fulfilled with the retirement of the mortgage debt owed by The Eddie Davis Community Center. The center had become his home away from home, with close friends as family. Although he announced his retirement in 2012, his presence continued, as did his fundraising efforts through 2019.
Throughout his life, Mel had received many accolades, which included being inducted to the Iowa Blues Halls of Fame in 2002, and most notably, the Iowa African-American Hall of Fame in 2010.
Melvin Harper was known as a generous, caring, and a disciplined gentleman. He was also a compassionate listener, advisor & leader to many.
Now, everyone knows why, he was called "The Boss".
Melvin was preceded in death by his loving wife Margaret. He is survived by his step-daughter, nieces, nephews, grandchildren, and great-grandchildren.
A Celebration of Life for Mel will be held at a later date.
In lieu of flowers, contributions may be made to:
The Eddie Davis Community Center
1312 Maple St, West Des Moines, IA 50265
(515) 277-1103

The family appreciates all the warm thoughts and prayers.

Posting as Who are you posting as?

Darlene Edmonds To the family of Melvin Harper ,my prays are with you at this time . He was my pew buddy at church we would look for each other if one of us miss a Sunday . I'll be on our pew by myself now he will be miss. Darlene

I met Mr. Harper at The Eddie Davis Center West Desmoines, Iowa in 2017. Enjoyed his conversations. I'd pick up donations from Panera Bread and Mr. Harper loved danishes! He'd smile patiently waiting for me to find his favorite sweets! Very humble and kind, it is an honor to have met him. I'll always remember him. To the family may The Lord keep each of you. Love Christine Craig

The services for Melvin have not yet been added. Please sign up below to be notified when the services are ready.

Get Notified When a Service is Added

Healing Registry Unavailable at the Moment!

No thanks. Go back to cart.
Product Details

Let the family know who you are using one of the quick sign-in options below.

The attached photos are added to the memorial of Melvin Harper to help share their legacy.

Add to Your Calendar

Please help memorize Melvin Harper by recording your attendance below.

We will notify you soon.

You will receive an e-mail daily when a guest leaves a tribute on this obituary.

You will receive a notification text whenever there's an update to this obituary.

Thank you for sharing your memory of Melvin

Help show your support by providing a gift of flowers and spreading the word.