Cemeteries are an Integral Part of Our History, so here are Some Unique Facts About them

Cemeteries have played an integral role in our history, and whether someone is choosing a funeral or cremation service in Iowa City, IA, traditional burial can still be utilized. Cemeteries offer a rich look into the past, so we have created this article to highlight some interesting facts and information about them.

Early American settlers originally started having their feet facing east when buried. This was because of a belief system they had which would involve being reborn and having their feet facing East meant they could rise with a new day’s sun. Once cemeteries started being placed in rural areas, the terrain became more hilly and rugged, meaning the graves had to change their direction.

American graveyards started having obelisk-shaped monuments placed in them around the 1840s. This was due to a revitalized interest in the culture of Egyptians because the obelisks were thought to be patriotic. They also worked well in smaller spaces and were more affordable than the traditional monuments.

The Inscriptions Have Changed

Inscriptions on the headstones are part of an expression of wisdom or feeling around someone’s loss, but in Colonial America, they were listed as warnings or statements about the individual passing away. After a deeper understanding of death came to the surface, these messages changed to ones of grief and hope.

You can also find some headstones with symbols engraved in them. An hourglass would indicate that time can fly by, or the praying hands can show as a sign of devotion.

Some Cemeteries have Rules

Most cemeteries are similar to city parks, where they have a specific set of rules recommended. Some of the most common ones are:

Commonly, materials like granite, sandstone, slate, marble, limestone, and wood were the most popular choices for headstones. Lower and middle-class families would generally pick sandstone, lime, or wood, with wealthy families using marble and granite. In addition, military graves are made from granite, bronze, and marble.

Cemeteries Have Many Uses

When you think of cemeteries, you may only consider them an option for burial, but this is not the case. Cemeteries have become properties used for multiple purposes, with some having museums placed on them to educate the public about the property. Others use the space to show movies or hold live music events.

We are a Trusted Name in Excellence 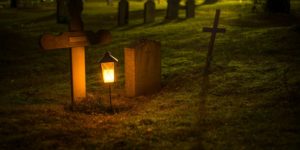 Cemeteries can be used for funeral or cremation service in Iowa City, IA, and if you need help scheduling a meaningful event, we are here to help. We are a locally owned company that takes great pride in offering exceptional and trusted services for all our clients and would love to assist you from start to finish. We provide compassionate support through the process so contact us today if you have any questions or need to schedule an appointment or immediate need.